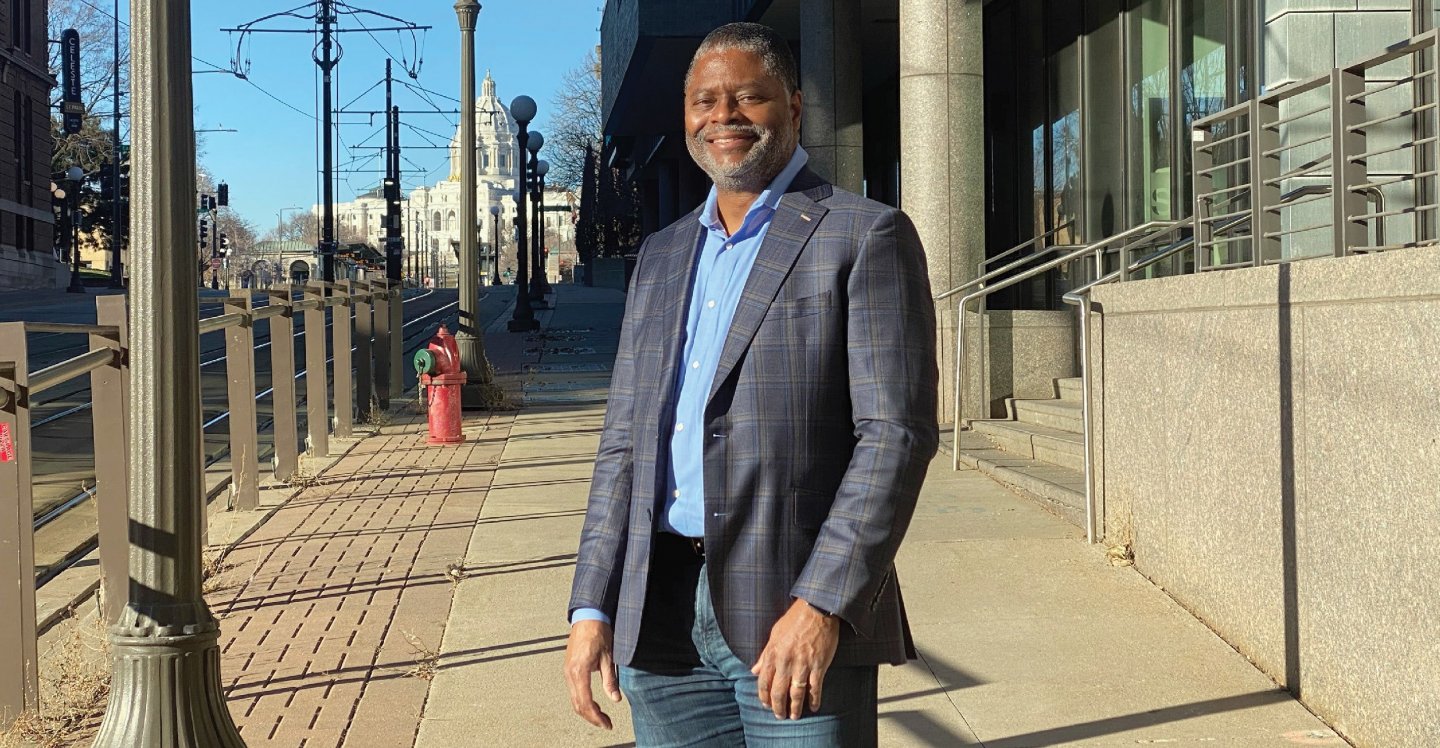 Starting a new job is never easy, but in his first month as president of Minnesota Public Radio, Duchesne Drew CC ’89 had to navigate a global pandemic, the economic downturn that ensued and the killing of George Floyd by Minneapolis police officers, all over back-to-back Zoom meetings from his home.

Floyd’s death was a local story for MPR, and the newsroom covered it aggressively as mass protests over police violence and racial injustice spread from Minneapolis to the rest of the world. At the same time, MPR journalists were grappling with uncertainty over a recent round of buyouts, and the looming threat of layoffs. “I was really proud of our staff,” says Drew, speaking from his home in St. Paul, not far from the bodega where Floyd was killed. “Two and a half months into Covid-19, everyone’s on edge, with friends and colleagues leaving. They did a tremendous job.”

Drew (his first name is pronounced “Du-shawn”) took the top job at MPR in May, becoming the first person of color to lead American Public Media Group’s crown jewel, MPR News, and its sister stations, The Current and Classical MPR. Combined, the three stations reach one million listeners a week on a $34 million annual budget. Before joining MPR, Drew led community engagement at the Bush Foundation, following a 20-year career in news- papers, most of it at the Minneapolis-St. Paul Star Tribune, where he rose from intern to managing editor for operations.

MPR’s diversified funding model has helped insulate it from the economic pressures facing many newspapers and commercial media. Its relatively large share of listener support — 40 percent — has helped blunt the pandemic-driven drop in ad and philanthropic underwriting revenue. Still, Drew had to let 17 employees go through buyouts and layoffs.

He admits that the job has been more challenging than anticipated, but says he draws strength from his past achievements. “I’m a Head Start kid who went to Columbia and Northwestern,” he says. “I’ve been with my wife for 25 years. I’ve had a great run, and I’m not done.”

Drew majored in history at the College, and planned to become a lawyer until an internship with the Bronx DA his sophomore year changed his mind. By the time someone appears before a judge, he thought, it already seemed too late. The following semester he began mentoring, and later tutoring, college-bound kids from the community at the Double Discovery Center. Led by people who looked like him, he says, DDC felt like a refuge, and the affirmation and support he received there energized him.

Drew spent two years as a development officer at DDC after graduation, but kept thinking back to his days writing and editing at Spectator. He earned a master’s at Northwestern’s Medill School of Journalism in 1994 and was hired by the Star Tribune when his summer internship there ended. Even then, his leadership potential was clear to the reporters and editors who elected him as their union rep, and to his bosses, who began grooming him for executive roles. “I saw the first Black editor of the Star Tribune,” says then-executive editor Tim McGuire, now retired and living in Arizona.

Born in Brooklyn and raised on Long Island, Drew felt out of place in the Twin Cities, which seemed to lack the vibrant Black middle class of his childhood. When he met another Black journalist from the East Coast, Angela Davis, they bonded over a shared passion for journalism and social justice. Neither made enough money to go out much to restaurants, so they stayed in and talked books. Eventually, the friendship grew into more; they married in 1996 and have two teenagers.

Drew’s arrival at MPR last spring was greeted enthusiastically; in the newsroom, where his wife is a host, and in upper management, where his old Spec pal, Dave Kansas CC’90, is executive VP of American Public Media Group.

Drew is widely known for his direct, tell-it-like-it-is leadership style, his compassion and his gift for spotting and nurturing talent, especially among those who have been historically marginalized.

His plans for MPR include growing its membership base by using digital tools to tell stories in new and innovative ways. Drew also wants to draw in more people of color, who are driving the Twin Cities’s population boom, and now represent a fifth of all Minnesota residents. His vision overall is to make MPR more diverse and inclusive.

Journalism especially needs a multitude of voices, says Drew. “Our job is to show people to one another,” he says. “Without a diverse newsroom, you’re going to miss things or misinterpret things. You’ll have a less authentic take on the world.” He argues that inclusive workplaces are also happier: “If you create an inclusive environment, everyone benefits.”

Kim Martineau JRN’97, SPS’18 is director of communications for the MIT Quest for Intelligence.